Perspectives: What is your vision for European Tech in 2021? #7 - European Champions Alliance
3798
post-template-default,single,single-post,postid-3798,single-format-standard,ajax_fade,page_not_loaded,,qode_grid_1300,footer_responsive_adv,qode-content-sidebar-responsive,qode-child-theme-ver-1.0.0,qode-theme-ver-10.1.1,wpb-js-composer js-comp-ver-5.0.1,vc_responsive

Perspectives: What is your vision for European Tech in 2021? #7 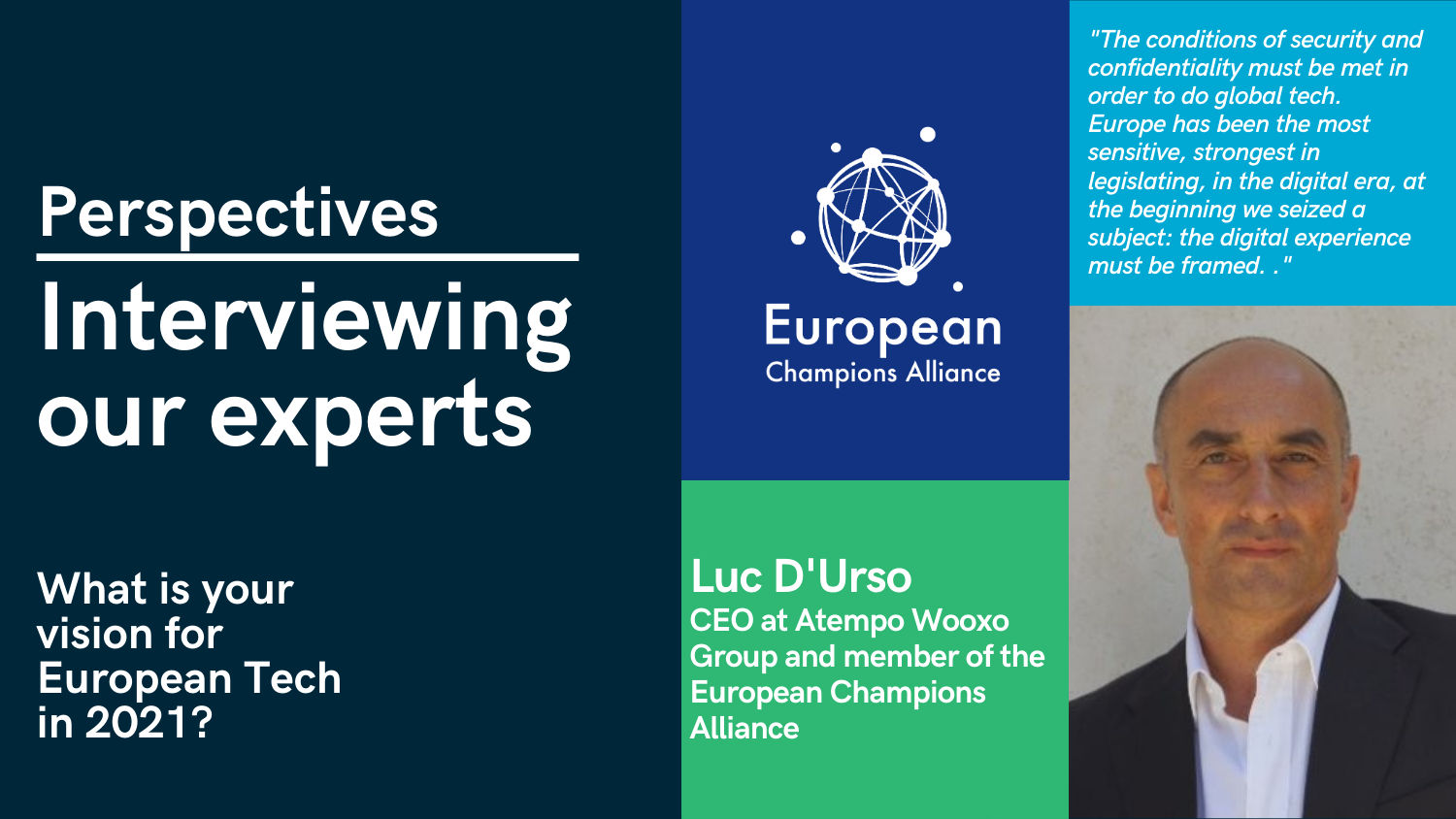 Posted at 14:23h in ECA Members, Interview, Life at ECA by Emma Neige

I had the privilege to interview Luc d’Urso CEO at Atempo.Wooxo Group, we discussed the issues of European tech in 2021. I recommend you sincerely to read his interesting perspective.
Emma Neige – Strategic Partnerships and Communication at the ECA

What are your predictions for European tech in 2021?

I don’t want to make any prophecies, but our predictions for 2021 can be made in the light of the past year, which has been so special, marked by a global health crisis of unprecedented proportions.

A wind of sovereignty

The digital technologies that have enabled our organizations to survive by profoundly changing the organization of work are for the most part produced by companies outside the Union’s borders.

The covid crisis has therefore acted as a revelation of the dependence of our public and private organizations on American technologies, which highlights the need to strengthen our autonomy and sovereignty.

The health crisis has also been accompanied by a cybercrime pandemic marked by attacks that have redoubled in intensity and frequency, hitting local authorities, companies of all sizes, and service providers alike: Solarwinds and Microsoft more recently.

At the same time, the aspirations of citizens and companies regarding the confidentiality of their data have been confirmed, with the cancellation of the Privacy Shield last summer.

It should be noted here that this need for confidentiality extends beyond European borders, as evidenced by the entry into force of the California Consumers Privacy Act in California, which is very much inspired by the RGPD.

The crisis has also accelerated the process of digital transformation in companies. Teleworking has necessitated the rapid adoption of business or collaborative solutions operated from a cloud platform. This trend is expected to continue this year.

Unfortunately, it has also significantly increased the surface area of exposure to cybercrime risk, and budgets in this area are expected to increase to between 5 and 10% of the overall IT budget, depending on the size of the organization and its activity. This pandemic has been accompanied by a cybercrime pandemic that has hit public and private actors alike, as we witnessed with the SolarWinds case: the installation of digital technology in a less secure world, a threatened digital experience, the risk of losing one’s data, and being interrupted in one’s activities.

The conditions of security and confidentiality must be met in order to do global tech.
Europe has been the most sensitive, strongest in legislating, in the digital era, at the beginning we seized a subject: the digital experience must be framed. Integration of these two notions in European tech. Due to the Covid, sustained demand, digital transformation process accelerated, collaborative solutions are a perennial trend. We will have to offer these possibilities since the demand is very dynamic.
Unfortunately, the demand for cybersecurity will continue to be maintained with the very high cybercrime threat. We can see that organizations will be led to invest and reserve 5% of their overall budget for security.

To sum up, the crisis has revealed a need for the sovereign, secure, and trusted digital solutions.

However, there is one small caveat to this optimism.

To what extent does Europe stand out from its competitors in this field? What are the particularities of the European market? Advantages/disadvantages?

As a preamble, it should be remembered that innovation is at the service of uses. Tech for tech’s sake is pointless. The competitiveness of Tech players is therefore directly conditioned by their ability to capture and process large volumes of data. This is how the American and Chinese digital giants were built on the B2C market.

The main growth area for data in the next decade is business. The accelerated digitization of public and private organizations, the inevitable democratization of applications based on artificial intelligence, the multiplication of connected and autonomous objects and vehicles are all rivers that are contributing to raising the level of this ocean of professional data.

This is therefore an opportunity for European Tech, as Europe is particularly spoilt in this area.

Volume and wealth of data

With 746 million inhabitants in the continental sense, 447 million within the Union, despite the withdrawal of the United Kingdom, it ranks third in terms of demographics and second in terms of Internet users, digital miners.

The European Union is also the world’s second-largest industrial power. The continent can rely on numerous large-scale companies, particularly in the chemical, pharmaceutical, and agri-food sectors, aeronautics, automobiles, and mechanical engineering…

Europe also has the highest level of public spending in the world. We can deplore this for the competitiveness of our companies or we can be pleased and appreciate the level of social protection, health coverage, or the quality of education and culture that we all enjoy. But this public spending could be a formidable lever for growth if public contracts benefited sovereign players. The United States and China do not hesitate to protect theirs and promote the growth of their champions.

We benefit from first-rate telecom infrastructures that are essential for digital uses: fiber coverage, 5G deployment, etc., but also the European Commission’s desire to provide Europe with a quantum telecommunications infrastructure.

The aim is to drastically improve the security of critical applications in the fields of telecommunications, finance, healthcare, electricity supply, and public services, for example. The stated aim is to have “a quantum secure network operational by 2028 and a quantum information network by 2035”.

The single currency, the free movement of goods, etc. are also serious assets for our industrial dynamism.

The mosaic of languages complicates commercial development, but it is also a complexity that our American and Chinese economic competitors must manage.

Finally, one of our invaluable assets is our mathematical excellence.

With eight Fields medallists over the decade, France has, for example, acquired international renown in the discipline.

The applications of mathematics have never changed the world as much as they have in recent years: computer networks, big data, embedded systems, the web… mathematics is everywhere, and the disruptive innovations resulting from fundamental work will continue to profoundly modify our uses.

But in order to continue to attract high-level students to mathematics and computer science, we need to be able to guarantee them a professional career.

I think we understand the need to decompartmentalize the public and private sectors, whose performances are more interdependent than ever. The public sector must encourage the growth of European companies, which will provide the qualified jobs that are the only ones able to offer employment prospects to students by draining the reservoirs of low-skilled jobs and by offering industrial prospects to research.

With digitization and digitalization on the rise in 2020, are European companies seizing the opportunity?

Whether it be sales of laptops, collaborative communication solutions, business applications, etc., it is clear that the accelerated digitization of the European economy has, for the moment, mainly benefited American and Chinese interests, given the distribution networks that are well established in Europe.

But things are changing…

On the one hand because of political awareness of the need to strengthen our digital sovereignty, a legitimate aspiration to more guarantees in terms of security and confidentiality, and also because of the evolution of the regulatory framework linked to the RGPD.

We also see that European TECH is organizing itself into an ecosystem:

On a national scale, La French Tech, for example, has become the leading ecosystem in the EU in terms of fundraising, raising 620 funds for a total amount of €5.4 billion. The HEXATRUST Group, which brings together cybersecurity and cloud computing players. But also at the European level, the European Champions Alliance being the best proof of this.

Who are the major players in the sector for you? Are they actively collaborating?

Cloud computing players are the core of the ecosystem.

They host the data, ensuring its confidentiality in accordance with regulations, the applications and servers that process it and offer a one-stop-shop enabling publishers to propose their offers on a global scale: OVHCloud, Outscale, Scaleway, Jaguar Networks are players that condition the health of the entire sector in the same way as Deutsche Telekom, Orange, SFR, etc.

And those who protect them in a curative way if the disaster could not be avoided, this is notably the mission of ATEMPO.WOOXO!

Do your predictions for 2021 tend towards an acceleration of this collaboration? Which areas do you think will flourish the most in the near future?

The acceleration of collaboration is inevitable: Solutions need to be assembled to simplify adoption.
This is what we are doing with our colleague MailInBlack by bundling its anti-spam and anti-phishing solutions with our anti-malware and backup software in our cybersecurity package dedicated to VSEs/SMEs.

When they cannot be integrated, they must at least be interoperable.

Which areas do you think will prosper the most in the near future?

In my opinion, the most promising are those whose activities are linked to data and information management, which are enhanced by AI to guarantee their integrity or veracity, secure collaboration, cybersecurity, autonomous vehicles of all kinds, continuing education, health, and environmental issues.

What do you expect from the ECA?

The ECA is like the European Tech Alchemist, whose mission is to transform our innovation capacities into economic realities with a view to promoting the growth and influence of its members.

It is a place for exchange between members, for sharing rich experiences. It is also a mouthpiece, enabling the European digital industry to federate, organize and make its voice heard. It is also an amplifier capable of increasing the influence of each member.

Finally, it is a place of reflection for entrepreneurs of conviction attached to a deontologically responsible technological evolution that respects European values: social model, citizens’ well-being, sharing of the wealth created for the benefit of the greatest number, eco-responsible development, but also security, confidentiality, freedom for citizens and companies…

Unleash the power!  We need a “Place de l’Étoile”, the ECA must be in the middle of the village to organize this interoperability, these alliances have to make the cake bigger and not increase the shares.